Until 1944, the Institute of Geology and Paleontology, like all geoscientific institutes and state collections, was housed in the Alte Akademie, Neuhauserstrasse 51 (now pedestrian area). 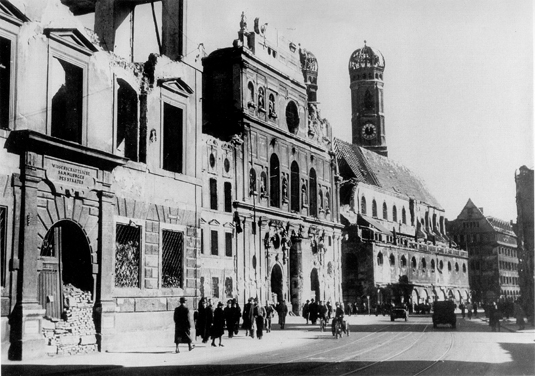 The destroyed building (pictured left) of the Akademie der Wissenschaften (Academy of Sciences) after a bombing raid in WW II.

As a result of the destruction of the facilities in the Alte Akademie during WW II, the institute was provisionally housed at different addresses in the first post-war years.  Teaching under ALBERT MAUCHER resumed in the summer semester of 1946.  The lectures however were spread out until 1948 in the Botanisches Institut (Botanical Institute) and in the Forstliche Versuchsanstalt at Luisenstrasse 14.  A note characteristic for this period was attached to the course catalog for the summer semester 1947: “Petrology class (MAUCHER/FISCHER) can take place only if the institute shed is completed.”

The situation improved drastically beginning in 1948, when some rooms in the library building of the Deutsches Museum were allocated to the institute.  The Institutes of Petrology, Mineralogy and Crystallography, and Geophysics subsequently moved into the same building. 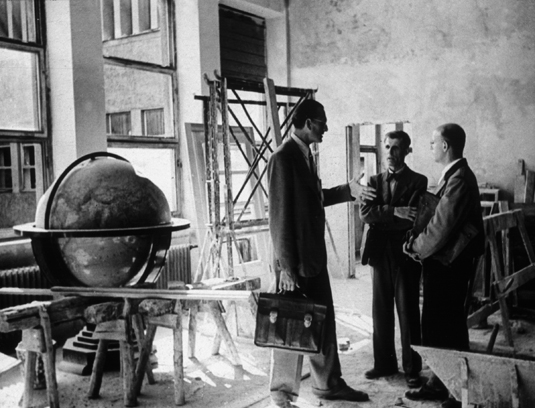 The situation improved drastically starting 1948, when some rooms in the library building of the Deutsches Museum were allocated to the institute.  The Institutes of Petrology, Mineralogy and Crystallography, and Geophysics subsequently moved into the same building, 1948. 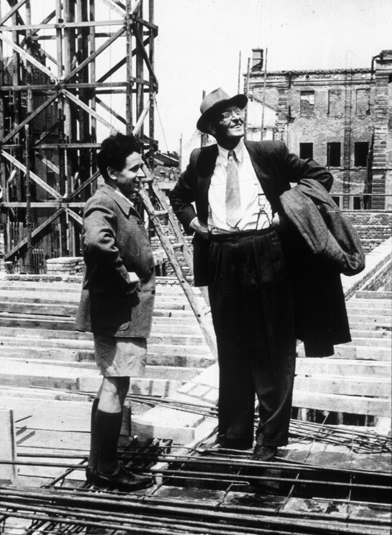 The large new building at Luisenstrasse 37 is one of MAUCHER’s great achievements, who was at the time Dean of the Faculty of Natural Sciences.  This happened at a time in history when the construction business was still struggling, and almost no funding for rebuilding was available. 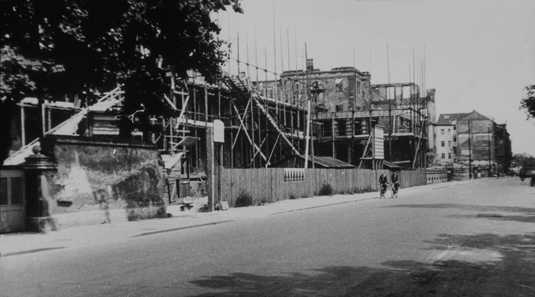 In 1950, the institute and the state collection were able move into their new home, in the first and second floor of the building.  At that time, the top floor housed the apartments for the professors.The new building was erected at the site of the Königliche Glasmalereianstalt (Royal Academy of Glass Painting), built from 1844 to 1846 by August Voigt, which consisted of a factory building and a gallery.  Max Emanule Ainmiller was then head of the renowned academy, which was later turned into the Kunstgewerbeschule (School for Arts and Crafts).  That building was destroyed during a bombing raid. 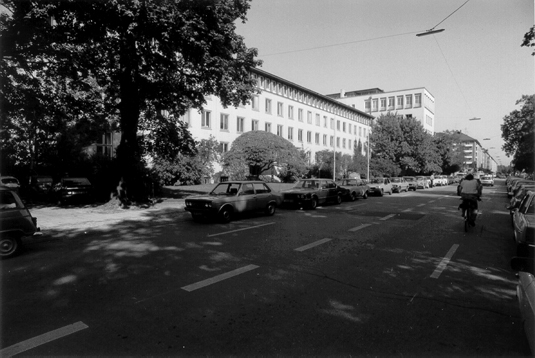 The building of the Institutes of Geosciences at Luisenstrasse 37, built in 1959 by Professor Maucher.